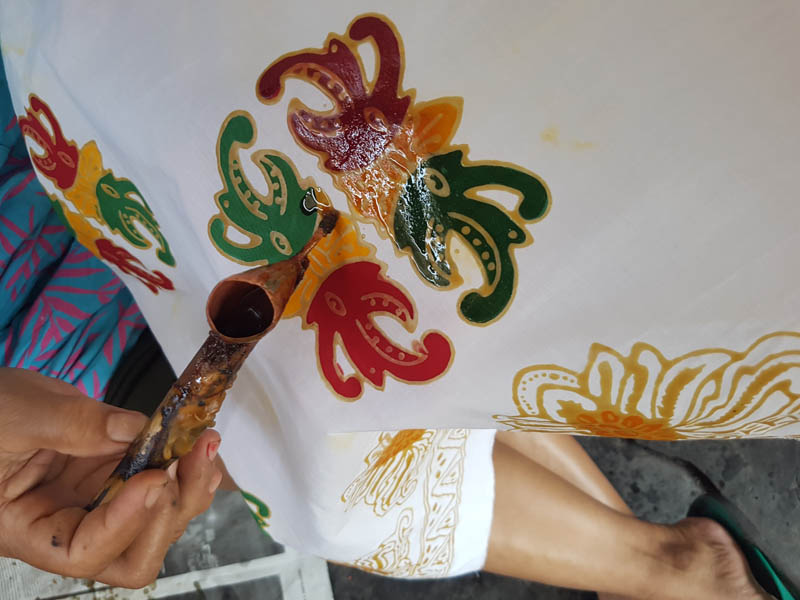 Thetraveljunkie.org – We know we’re a bit tiresome and we’ve said it quite a few times already, but our love and appreciation for the great heritage continues to increase. We believe respecting, looking after and admiring culture should be part of everyone’s daily existence. This is probably one of the reasons why we decided to head to Kampung Batik Laweyan in Solo, Central Java when we did; to enjoy one of culture’s greatest spectacles: the batik process.

The word is of Javanese and Indonesian origin and describes the coloured fabric and process of producing patterns by using fabric dyes and wax in the creation of the design. Multi-coloured batik allows for the production of complex patterns, akin to paintings.

Batik is a traditional process of applying wax and dyes to fabric to achieve intricate and colourful patterns. The tradition of batik is particularly prevalent on the Indonesian island of Java and was handed down from generation to generation and was usually an occupation of village women. Over time the process has evolved from a hand-drawn technique known as batik tulis, where the designs were hand-drawn onto the fabric, to batik cap, where the designs are stamped onto machine-made fabric using specially crafted copper stamps. The traditional process of batik tulis is still practiced in some communities but is far less common than it used to be. The long process of making a length of batik cloth begins with the cloth itself. The highest quality cloth producing the finest batik is known as primisima quality, followed by prima quality, biru (blue) quality, and merah (red) quality which is the coarsest. 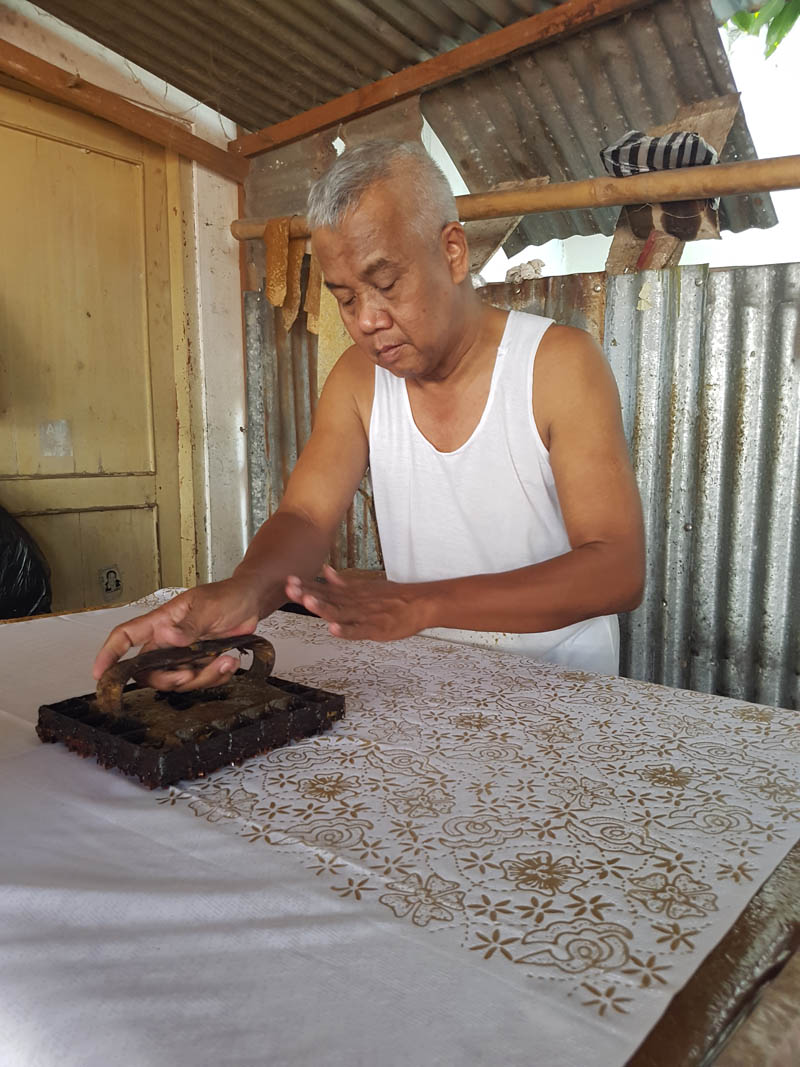 Batik Cap. Due to industrialisation in the early 20th century, batik cap emerged in Indonesia. The batik cap is where the wax is applied using a copper stamp, called cap instead of being hand-drawn onto the fabric. The stamps are made in various patterns and are applied to the fabric in a repeated manner across the surface like block-printing. Batik cap is easier and cheaper to produce than batik tulis, however some batik makers might use batik cap for the main pattern and employ batik tulis for fine details on their cloth. 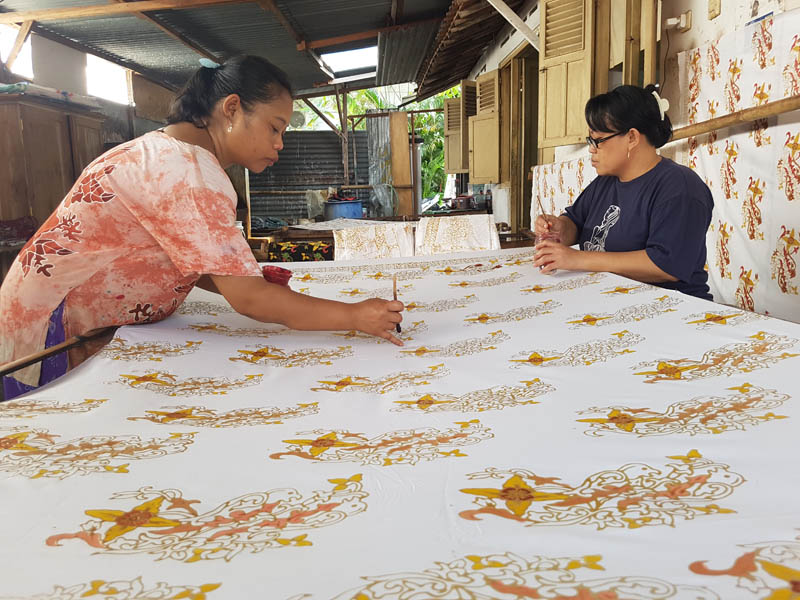 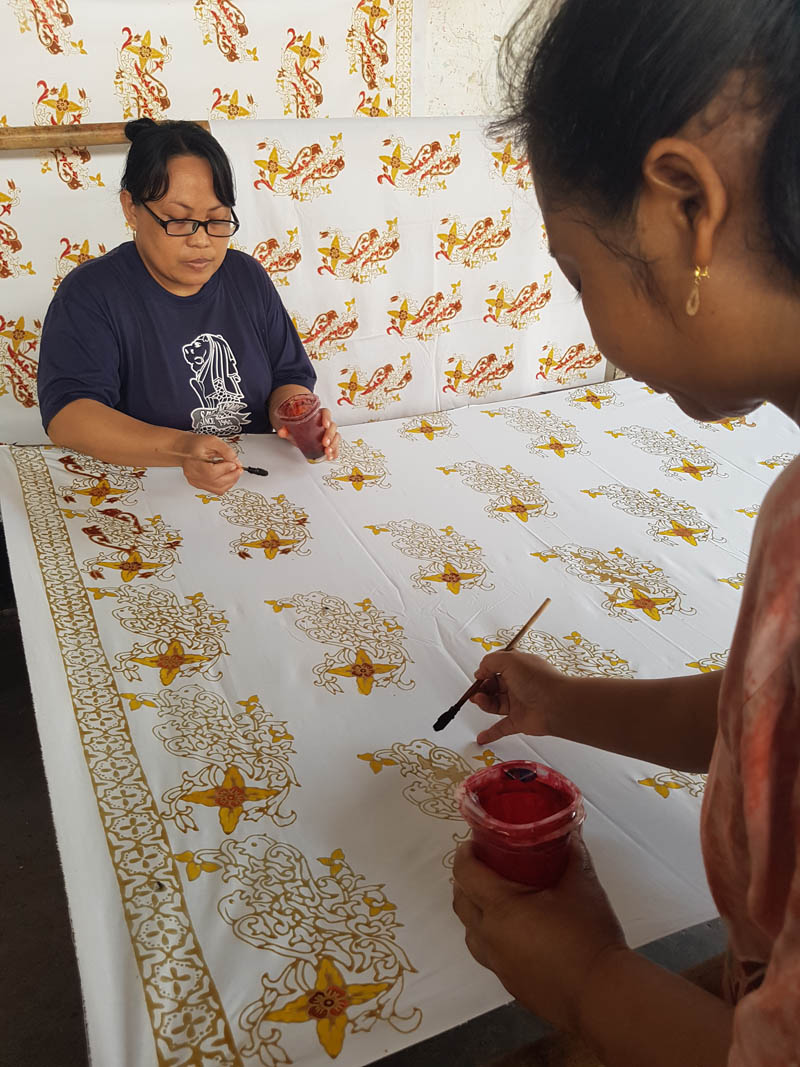 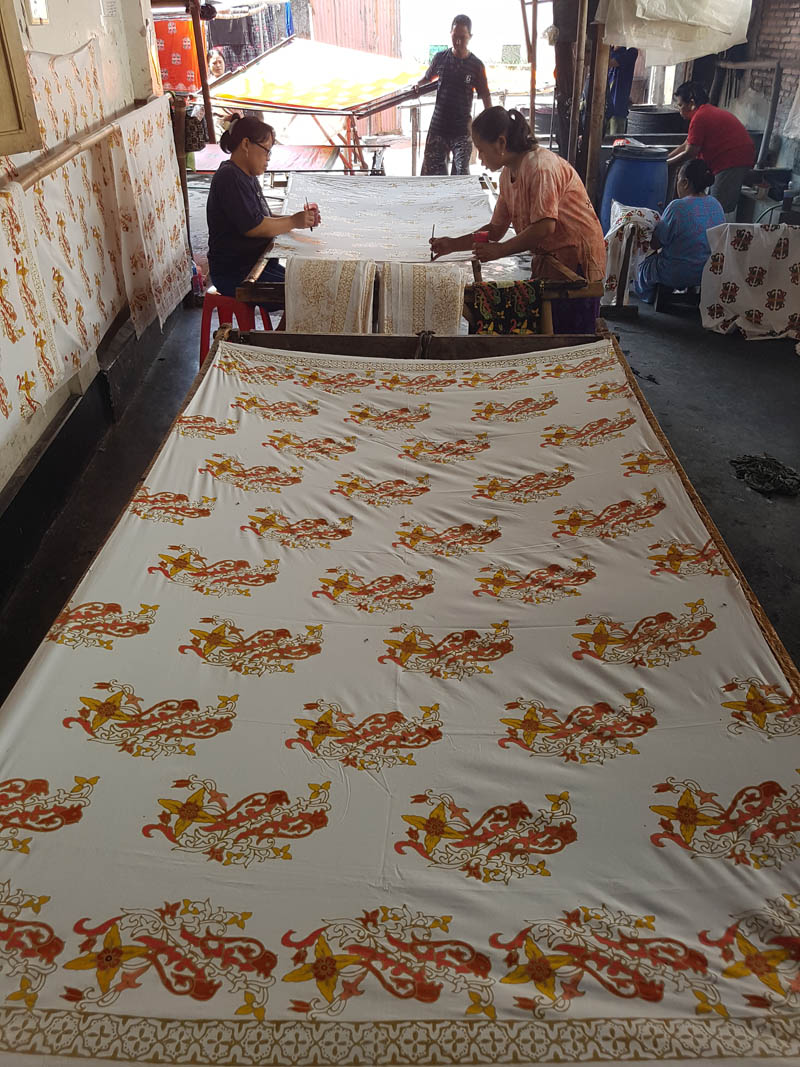 And Batik tulis is the oldest form of batik making in Indonesia, where the wax is written or drawn (tulis) onto a length of fabric. The fabric is first thoroughly washed, then kneaded and dried. Oil and a paste made from rice or cassava is then applied to stop the wax penetrating the fibers of the fabric. The process of pattern-making involves several stages. 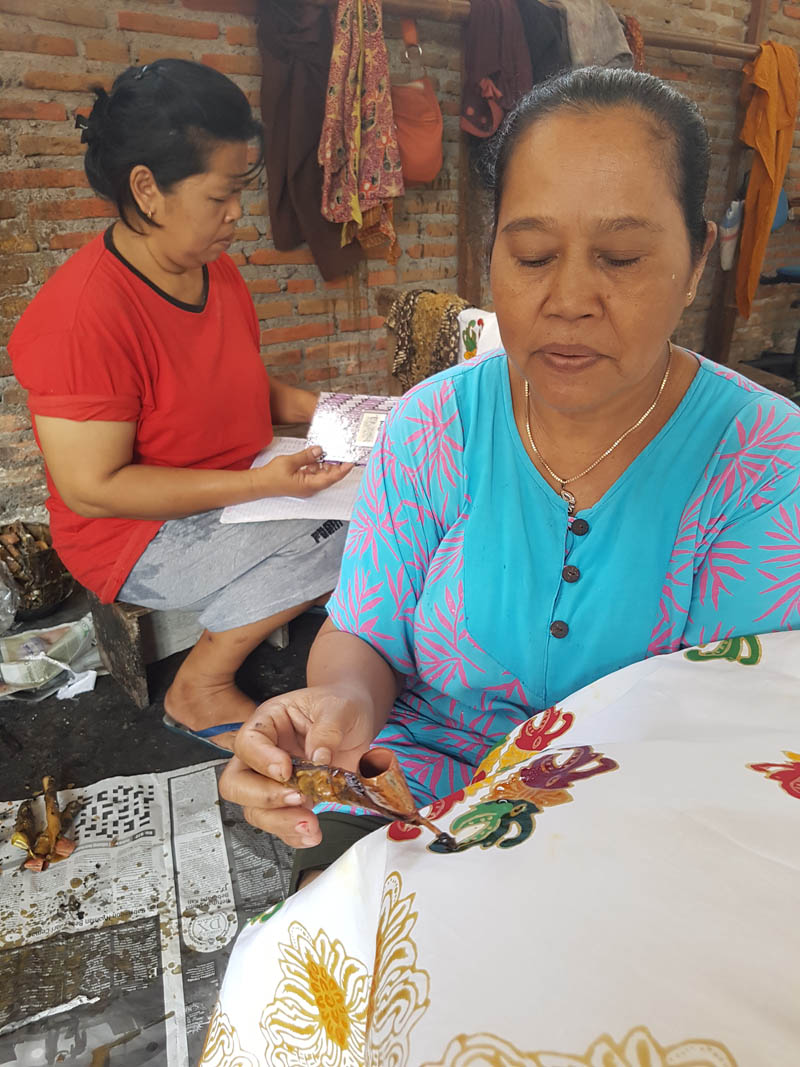 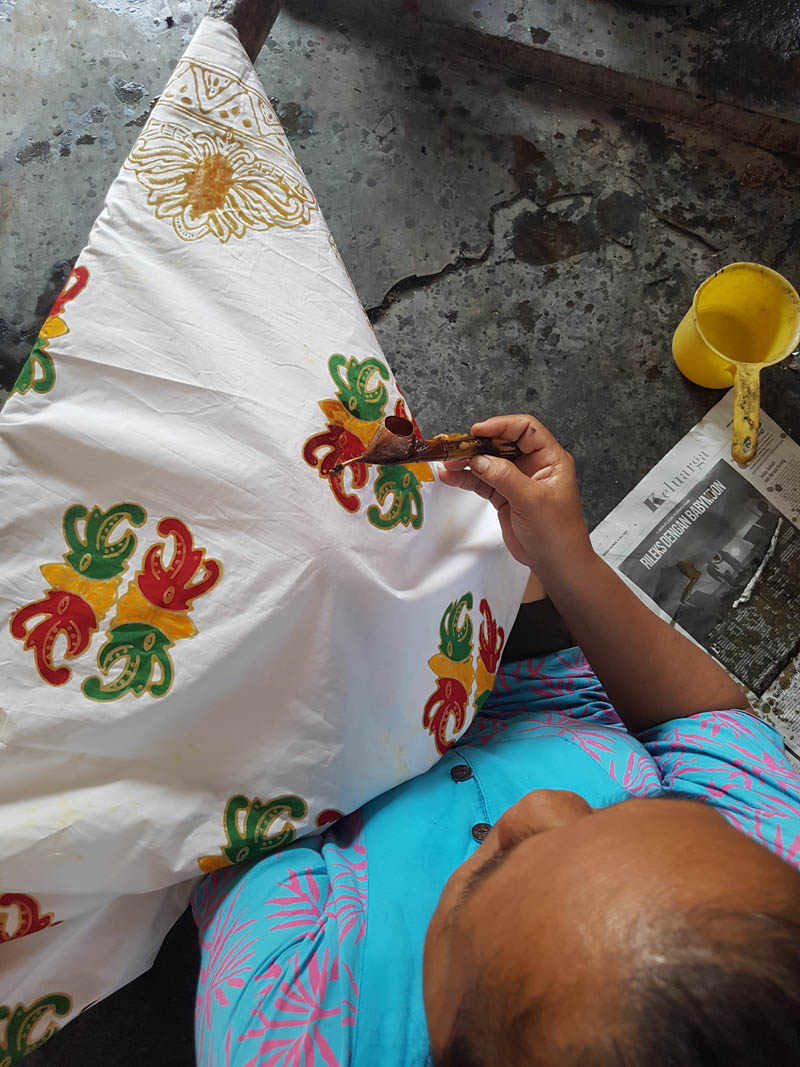 First, mencanting, the design phase where wax designs are applied to the fabric, usually using a traditional tool called a canting. It is an instrument consisting of a wooden handle and a small metal cup filled with melted wax. The wax is heated and drawn or dripped out of the canting spout onto the fabric. The wax (malam in Javanese) is traditionally beeswax. It protects the selected, waxed areas of the fabric from being coloured in the dying process. 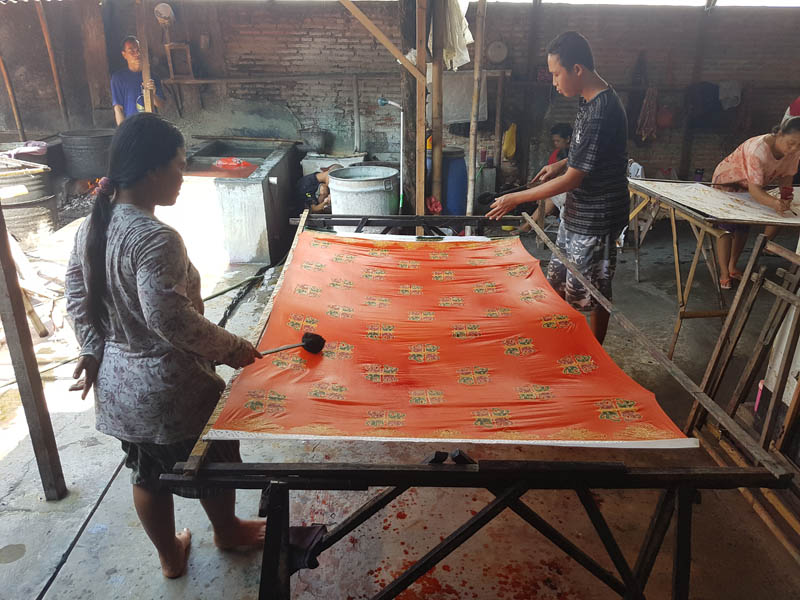 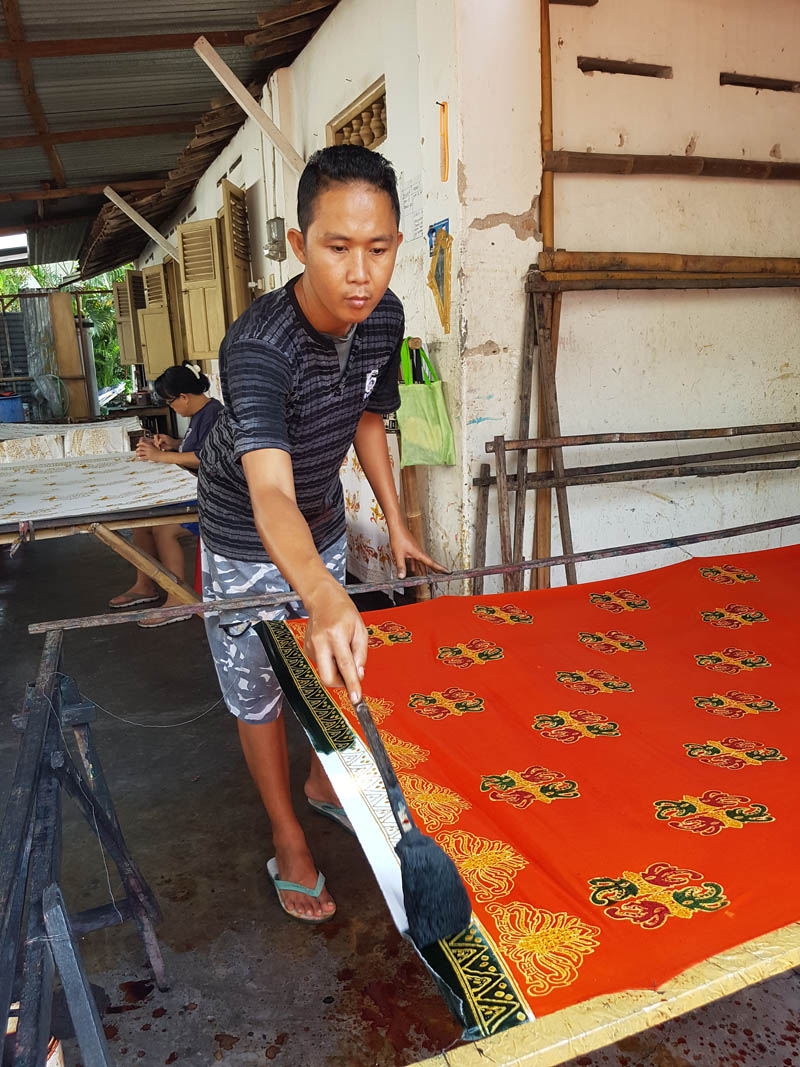 The second phase, mewarna, involves the colouring process where the fabric is dyed, traditionally using natural dyes, often made from plants. The waxed sections are protected during this process and remain dye-free.

The dyed fabric, with wax still on is then dried (mengering) and soaked in a bath of colour-fixing agent (memati warna). Afterwards, the fabric is washed (membasuh dan membilas) in lukewarm water in order not to melt the wax.

The waxing and dying process is repeated several times, with drying, colour-fixing and washing until each colour of the design is applied and the desired pattern is complete. During the dying process the wax is sometimes accidentally or purposely cracked by the maker which achieves a special effect known as menyapu lilin. Finally, the wax is scraped off with a knife and the fabric is boiled (merebus) to remove any remaining wax. 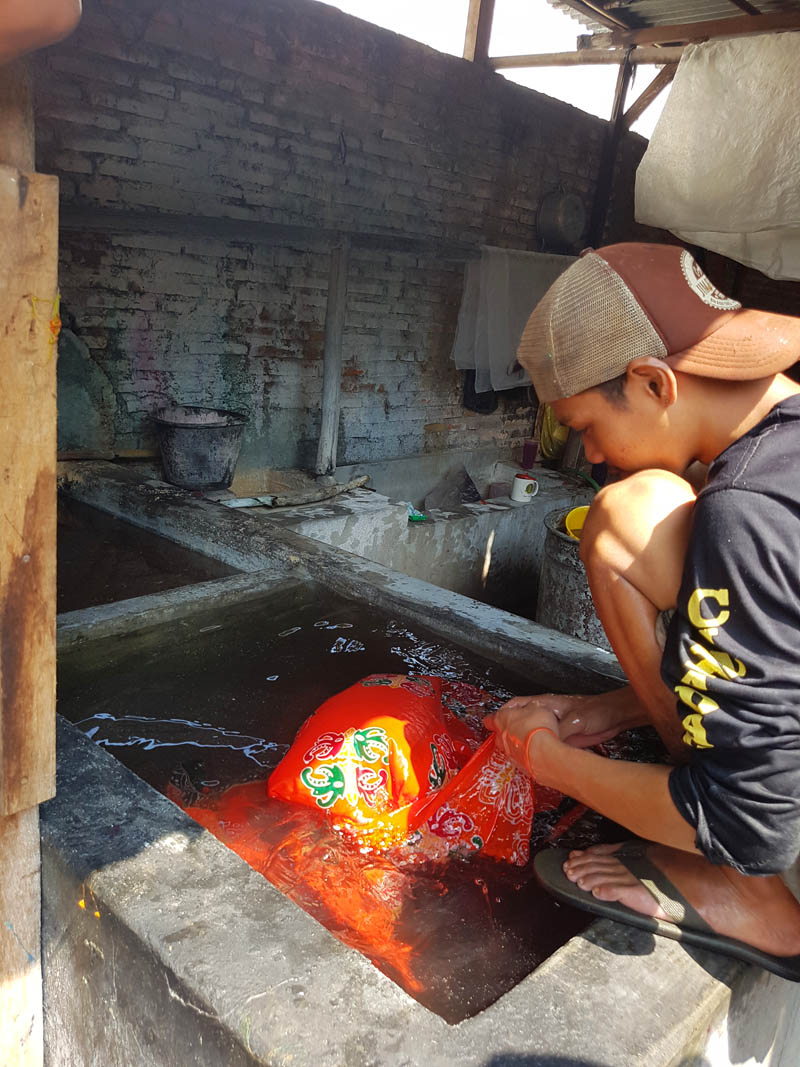 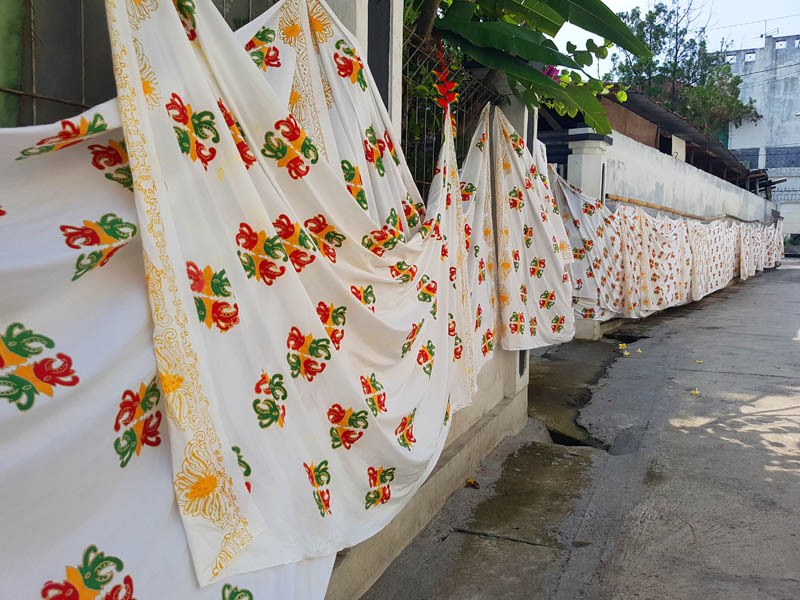 Stay tuned for more adventures around Central Java with @thebojoku in Indonesia.